This tour is specifically designed for travellers who wish to benefit from fewer days touring yet still experience the primary highlights of Greece. A local licensed tour guide will escort you throughout the tour providing historical and cultural insight via commentary with visits to archaeological sites and landmark stops.

As named, our “Greece On The Go” tour aims to achieve more for less meaning more to see over less days, therefore we would rate this tour as moderately intense. 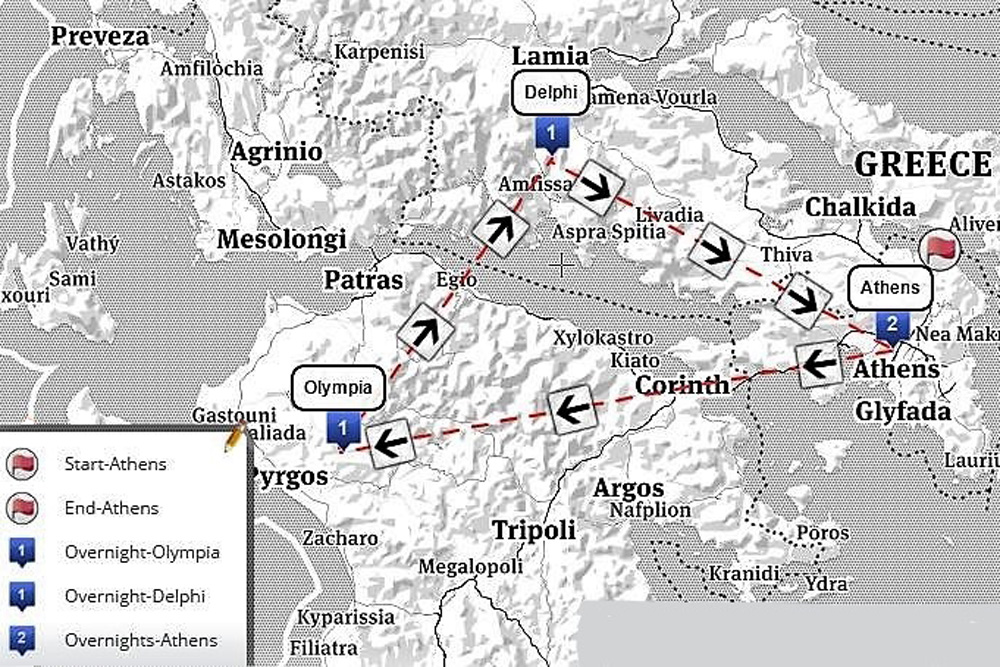 Check-in to your hotel from 2pm.

Your tour guide will meet you at reception after breakfast. Beginning with an early departure from Athens, a short journey to our first stop at the Corinth Canal. The 6,346 m long isthmus, is one of the four pre 20th century, man-made waterways on earth. The canal connects the Aegean Sea (East) with the Ionian Sea (West). Continuing into the Argolida region, visit the Ancient site of Epidavros housing both the healing Sanctuary of Asclepius and an Ancient Theatre with its original circular orchestra and unique acoustics. Remaining in Argolida, our next visit is to the Archaeological site of Mycenae which was the center of power in the Late Bronze age from the 16th to the 11th century B.C. The Acropolis of Mycenae protected the royal families inside the famous Cyclopean walls. Via the Lions Gate walk to the Palace of Agamemnon who was murdered by his wife upon returning from the Trojan War. A break for lunch in a nearby village and a visit to a local ceramics workshop before continuing our journey to Olympia for our overnight stay.Evening at leisure in the village .

Begin the day with a short walk to the Archaeological site of Olympia. A site of worship dedicated to Zeus, the father of the 12 gods and the birthplace of the Olympic Games held every 4 years originating in 776 BC. See the Ancient Stadium, the Temples of Hera and Zeus, The Palaestra for practicing boxing and wrestling and the workshop of the great sculptor Pheidias. Late morning, we depart Olympia and begin our journey to Delphi. En-route we will see the modern Rio-Antirio bridge, the world’s longest multi span cable-stayed bridge completed in 2004 connecting the Peloponnese to the Greek mainland and also a quick stop at the beautiful Venetian Harbour of Nafpaktos, otherwise known for the naval Battle of Lepanto in 1571. After a break for lunch, and with a short drive remaining, we approach our final destination for today, the Archaeological site of Delphi. Once known as the Naval of the Earth as determined by Zeus and home of the Delphic Oracle who influenced and advised in ancient times on all levels of political or private affairs, at the site of Delphi you can also see the Temple of Apollo, an ancient stadium, the gymnasium and of course the Tholos at the sanctuary of Athena Pronaia. Afternoon arrival in Delphi and evening at leisure in the village.

An early start leaving Delphi to begin our return journey to Athens with a short stop in the neighboring village of Arachova first to see the breathtaking views of the Olive Groves. Lunch break en-route. Upon arrival in Athens we begin with the Acropolis of Athens also known as “The Parthenon”. An orientation drive of the city follows stopping at the Olympic stadium of Athens (home to the 1st modern day Olympic games held in 1896), the Parliament Building of Syntagma Square guarded by the Evzone soldiers in traditional costume finalizing the day with free time in the central Plaka area of Athens for either a walk or shopping. Evening at leisure.

Check-out of your hotel by 12pm.

This tour is available throughout the year.

If you wish to book this tour with less participants please send us an email with the details and we will reply as soon as possible .

As some group members may not wish to visit all the sites and museums included in the itinerary, entrance fees are not pre-paid but paid directly by tour members upon entering the site.

Upon our confirmation to you for a land tour, a deposit of 30% is required in order to reserve space. This deposit is refundable up to 45 days before the tour starting date. Within 45 days of the starting date cancellation policy for land tours will apply.

Additional nights are available providing we are advised at the time of booking for either pre or post tour extra nights.

Land  Tour prices do not include