With our Classical Greece tour we offer touring at a leisurely pace which includes not only the main Archaeological sites visited daily but also allows for time while touring to stop at various important landmarks with the historical and cultural value of each fully explained by our licensed tour guide all the way. 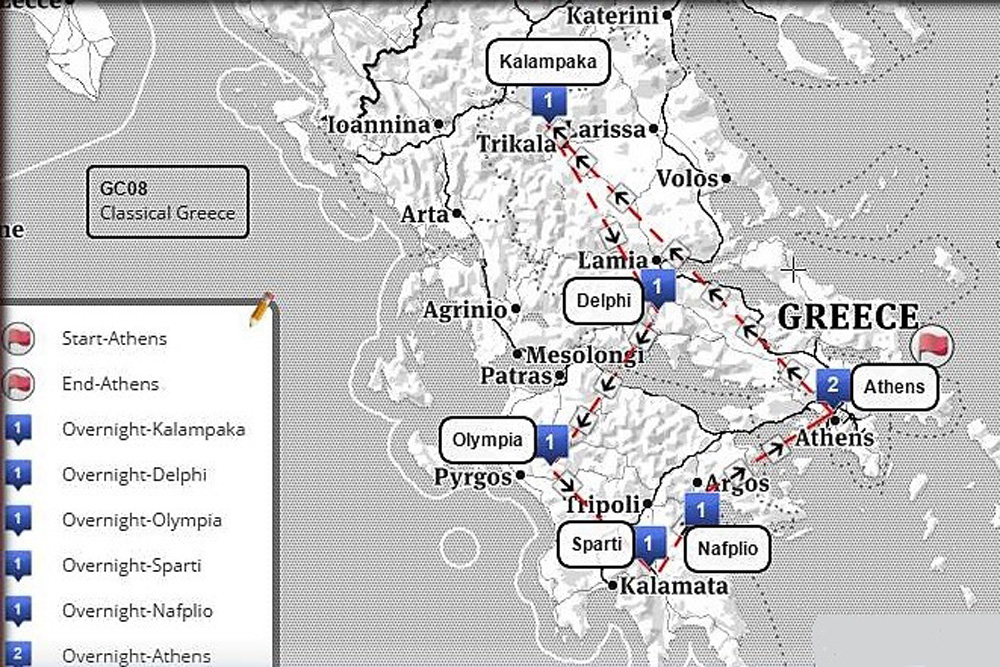 Check-in to your hotel from 2pm.

After breakfast we begin our tour with the sights of Athens. The changing of the guards (Evzones) at Syntagma Square, the Acropolis, otherwise known as the Parthenon, the Olympic Stadium where the first modern day Olympic games were held in 1896, Hadrians Arch and the Temple of Olympian Zeus are included in today’s orientation drive of the city and sightseeing tour.

Departing Athens and en-route to Kalambaka we first stop at the memorial of the Spartan King Leonidas who led the Greeks in battle against the Persian Empire of Xerxes in 480BC at the battle of Thermopylae. After lunch, we continue on to Kalambaka for our overnight. Evening at leisure in the village.

This morning we will visit the magnificent monasteries of Meteora. The name “Meteora” in Greek meaning suspended in the air, defines these monasteries which are built on top of gigantic rock formations perched above the village of Kalambaka. Impressive, serene, magical, inspirational, breathtaking, mystical, spiritual are some of the words used to describe the Meteora phenomenon. Before leaving Kalambaka we will visit a local Icon workshop to see how the Icons are painted and made. After lunch, time to relax on the coach while we journey to Delphi. Free time in the evening at leisure in the village.

Today begins with our sightseeing tour of the Archaeological site of Delphi. Once known as the Naval of the Earth as determined by Zeus and home of the Delphic Oracle who influenced and advised in ancient times on all levels of political and private affairs, at the site of Delphi you can see the Temple of Apollo, an ancient stadium, the gymnasium and of course the Tholos at the sanctuary of Athena Pronaia. After lunch and en-route to Olympia we will drive via Nafpaktos to see the Venetian Harbour, otherwise known for the naval Battle of Lepanto in 1571. Before our final destination of Olympia, one quick stop on the modern Rio-Antirio bridge, the world’s longest multi span cable-stayed bridge completed in 2004 connecting the Peloponnese to the Greek mainland. Late afternoon arrival in Olympia.

Begin the day with a short walk to the Archaeological site of Olympia. A site of worship dedicated to Zeus, the father of the 12 gods and the birthplace of the Olympic Games held every 4 years originating in 776 BC. See the Ancient Stadium, the Temples of Hera and Zeus, The Palaestra for practicing boxing and wrestling and the workshop of the great sculptor Pheidias. After lunch we leave Olympia and begin our journey through the Peloponnese to Sparti. Once a great nation of warriors, little can be seen today to remind us of the mighty Spartans.

This morning we leave Sparti and make our way to the site of Mystras. Built on the slopes of the Taygetos Mountain and once a strong and flourishing Byzantine town of the 13th century, you can see the castle at the top of the mountain and walk through the remains of churches and dwellings of the upper, middle or lower cities which were inhabited until the early 19th century. Lunch in the area of Mystra before proceeding to Nafplio.

This evening you will enjoy exploring this seaport town. Once the capital of the First Hellenic Republic, the attractions of Nafplio include the Venetian Fortresss of Palamidi where the hero of the Greek Revolution Theodore Kolokotronis was imprisoned and the water castle of Bourtzi located in the middle of the harbour and accessible via the “Kaiki” boats. Evening at leisure.

After breakfast we leave Nafplio and make our way to the Archaeological sites of the Argolida region starting with the Ancient site of Epidavros housing both the healing Sanctuary of Asclepius and an Ancient Theatre with its original circular orchestra and unique acoustics. Then on to the Archaeological site of Mycenae which was the center of power in the Late Bronze age from the 16th to the 11th century B.C.  The Acropolis of Mycenae protected the royal families inside the famous Cyclopean walls. Via the Lions Gate walk to the Palace of Agamemnon who was murdered by his wife upon returning from the Trojan War. A break for lunch in a nearby village with a visit to a local ceramics workshop before beginning our return journey to Athens. One final stop en-route at the Corinth Canal, a 6,346m long isthmus which is one of the four pre 20th century man-made waterways on earth. The canal connects the Aegean Sea (East) with the Ionian Sea (West). Free time to either relax at your hotel or you can return to central Athens to explore Plaka for some last minute shopping. Evening at leisure.

Check-out of your hotel by 12pm.

This tour is available throughout the year.

If you wish to book this tour with less participants please send us an email with the details and we will reply as soon as possible .

As some group members may not wish to visit all the sites and museums included in the itinerary, entrance fees are not pre-paid but paid directly by tour members upon entering the site.

Upon our confirmation to you for a land tour, a deposit of 30% is required in order to reserve space.This deposit is refundable up to 45 days before the tour starting date. Within 45 days of the starting date cancellation policy for land tours will apply.

Additional nights are available providing we are advised at the time of booking for either pre or post tour extra nights.

Land  Tour prices do not include